About a mile to the West of the village of Lowther, and South of the church of St Michael, Lowther castle overlooks the massive parks laid out in the early 19th century.

The castle was started in 1806 for Sir Hugh Lowther, and built following designs by Sir Robert Smirke. This relatively modern 19th century building is sited either on, or near earlier towers and peles, dating from 1272, 1350, 1628 and 1692. These earlier buildings were variously great houses, fortified towers\pele towers and minor castles. However, the castle we see today is no more than a ‘faux’ castle….a fake built to indicate the power and wealth of the Lowther family. The main range of buildings, as shown in the photo above, are built over the footings and foundations of towers from the various periods mentioned above.
This area has been the seat of the Lowthers since the reign of Edward I, and the family have been knighted almost continually since this period, from generation to generation.
Today, the castle is empty and in places in danger of complete collapse. It seems that the expense of running such a splendid and massive castle or house, was too much for the Lowthers, and in 1935 it was closed. Most of the interior was removed and perhaps sold, including roofing materials and marble floors and staircases. The castle isn’t open to the public at the moment, although it undergoing some reconstruction and consolidation to ensure that further collapse is halted.
As the castle is built on private land, it's extremely difficult to get a good, close up photo of it. There is a footpath that runs through the park, enabling closer inspection, so a return visit will be necessary in future. 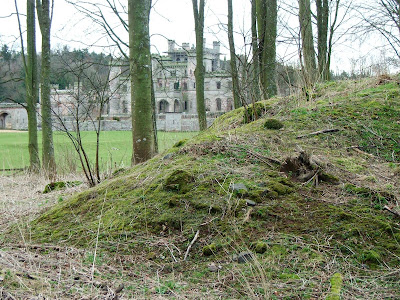 This photo shows the castle from the earthwork remains that can be found on the footpath that runs nearby.
Posted by The Cumbrian Castle listing. at 7:22 pm

Love your blog!!Through researching my family history I have found several of my ancestors buried in the churchyard of St Michael's church, Lowther. One of them- my g.g.grandfather- was a stonemason who helped build Lowther Castle. He was born in Scotland and his obituary said that he was the last of "those who came from Scotland to build the castle" Have you any idea where in Scotland that might have been? I have been searching for his birth in Scotland for years - just wondered if you might know? Regards Jane Jones

Yes, such a wonderful photograph of Lowther castle, and one that must be mistaken for another. Yet, these things happen, and so you may just want to check your source on this photo (they may be mistaken as well :). The only Lowthers I know from the first family still alive her in the U.S.A. They are my husband, his mother and his uncle, and his cousin, along with the children from these four marriages. May I suggest this website if you are truly interested in the Castle today: https://www.lowthercastle.org/ You are welcome! Mrs. J. Lowther

Thank you for your comments on Lowther Castle Mrs J. Lowther. I can however assure you that the photo does in fact show Lowther Castle....taken by myself a number of years ago. I've visited the castle many times over the past few years so yes....I'm familiar with the castle and its wonderful grounds. Thank you again!.