Kendal Town Hall dominates the top of Lowther Street, where Stricklandgate and Highgate meet. It can be seen from most parts of the town above the roof tops, with the clock tower being especially visible. The building is an amalgamation of various building periods, and is built on the site of the town’s White Hall, also known as Leaden or Leather Hall, which was once used as the cloth exchange for the cloth trade in Kendal. Cloth was traded with the Americas during this period, with large amounts being shipped out to Virginia. 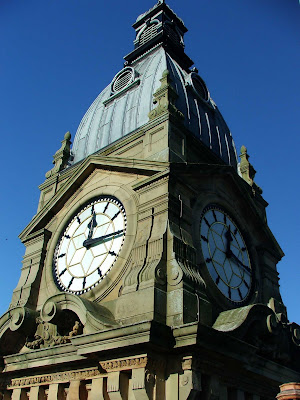 Above. The clock tower.

In 1825, the White Hall was purchased and a new White Hall, designed by Kendalian architect Francis Webster, was built in its place. The new White Hall contained a billiards room, newsroom and a lecture hall that also doubled as a ballroom. 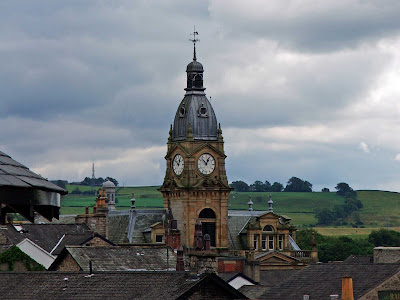 Above. Kendal skyline, dominated by the Town Hall clock tower.

For quite some time the White Hall was a popular local meeting spot, until in 1859, it was decided that the old Moot Hall (once upon a time, Thornton’s chocolate shop) needed replacing as the town hall. The decision was made to transfer the town hall functions to the White Hall, and George Webster was employed to prepare the building for its new lease of life. Webster added some lock up cells in the basement of the building, which eventually became the new police station. These cells are still in use today by South Lakeland District Council as store rooms and offices, and the station entrance can still be seen down Lowther Street. He also added a courtroom to the rear of the building. These Webster designed changes represent the Southern portion of today’s building (i.e. the portion once occupied by the Tourist Information Office, now the newly refurbished SLDC Reception) 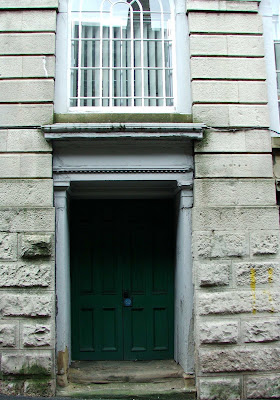 Above. The original entrance to the Post Office on Lowther Street.


It is reputed that one of George Romney's very first commissions, was to paint a hand holding a letter, that was used to indicate the location of the Post Office. There is at least one reproduction of this small painting in Kendal Museum. 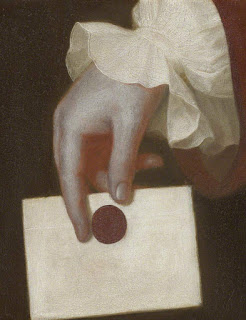 Above. Hand holding a letter, by George Romney. 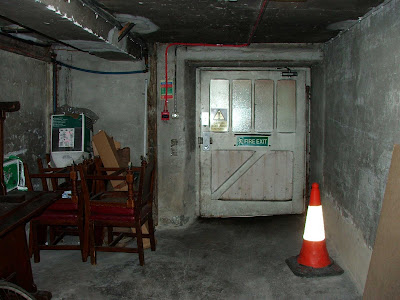 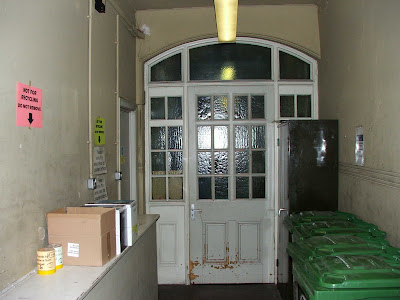 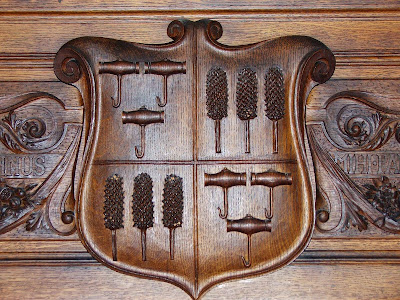 Above. Kendal's coat of arms above the fireplace in the Bindloss Room.

The original building had a cupola where the clock tower is today. This was replaced with a clock and tower in 1861, thanks to a hefty financial gift from John Wakefield. Originally the clock faces were lit with gas lamps. In 1893, the building was again extended, this time on the Northern side, a wine merchants being demolished to make way for extra rooms. The new portion of the town hall was funded by large donations from Alderman William Bindloss and his wife Agnes….to the tune of around £7000. Alderman Bindloss died before the extension was finished, but a room in the new portion of the town hall was named after him in his honour. The bells that can be heard everyday were also paid for by Alderman William Bindloss and cost a total of £3000. The eleven bells were first rung in 1897 in celebration of Queen Victoria’s Diamond Jubilee. The bell from the old clock was moved to the fire station (either on Busher Walk or Finkle Street?) 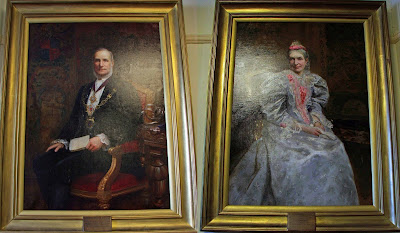 Above. Mayor Bindloss and his wife...benefactors of Kendal Town Hall.

The town hall is home to an extensive gallery of past Aldermen and mayors. In the Town Council chamber there is a collection of original and copy paintings, detailing some of the more well known past mayors of the town whilst SLDC also owns a collection of paintings of Chairmen of Kendal Town Council and South Lakeland District Council from the past 30 years or so. 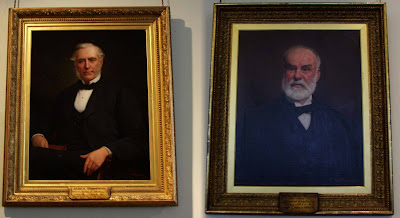 Above. A few portraits of some of Kendal's Mayors of days gone by. 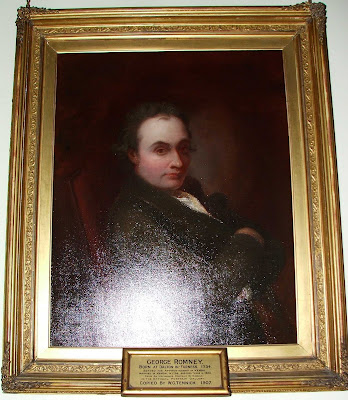 Above. George Romney. World renowned portrait artist and one time Mayor of Kendal.

Hidden away on the first floor at the front of the town hall is the Mayor’s parlour. This room is home to some of the more valuable and rare antiquities that the town possesses. For example, there is Queen Katherine Parr’s book of devotions. The book is one of the last surviving items owned by the Queen, and was bought by public subscription for the town in 1936. The town’s regalia, Sword of state and maces, are also kept safely here, as are the town’s charters. The Sword was presented to Kendal on behalf of Charles II, and is said to be one of only twenty (or 47...Kendal Town Council's website seems a little confused!!) to be presented to towns across England. The maces were presented to Kendal in 1647 and 1648, and both maces and the sword are used during ceremonial affairs.


Outside the town hall, and to the left of the main entrance, there is a curious lump of stone set into the wall. The story goes, that this piece of stone was once part of base of the town’s Market Cross and originally stood in Stricklandgate near the market place. It is, so the story goes, called the Ca Steean, or the Cauld Stean, and was used as a place from which important local and national events were announced. The accession of King Edward VIII and George VI and Elizabeth II were announced from this spot, as well as the ill fated Prince Charles, aka Bonnie Prince Charlie. It is unlike any cross base that I have ever seen....there appears to be no socket into which a cross could or would have been mounted (unless the stone is now upside down and the socket is out of sight)  The stone was used as a meeting spot for George Fox, the Quaker preacher, when he addressed the crowds in Kendal in 1652. At this time, it was situated in the market place. However, it was moved when the market place was reduced in size, to where the current war memorial is situated. When the library at the head of the market place was demolished, it was again moved to its present home outside the town hall and underneath the Bindloss’s foundation stone. 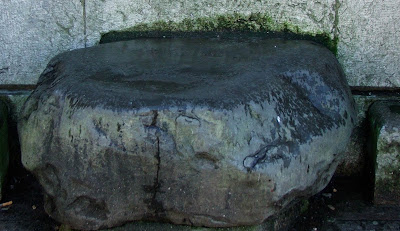 Above. The Calling Stone, from which Prince Charlie was proclaimed King in 1745.

Towards the end of 2019 an extensive refurbishment project was undertaken, incorporating both the SLDC offices to the rear of the Town Hall and the Town Hall itself, The building was brought back into front-line use, with SLDC's reception moved to the front of the Town Hall into the room that used to house Kendal's Tourist Information Centre. Other rooms were upgraded for their use as meeting rooms and offices, bringing the building out of its Victorian garb and into the 21st century.
During the refurbishment, the old Council Chamber was removed, to be replaced with more modern accommodation for South Lakeland District Council's councillors, 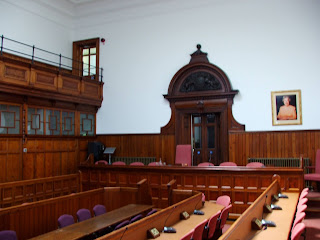 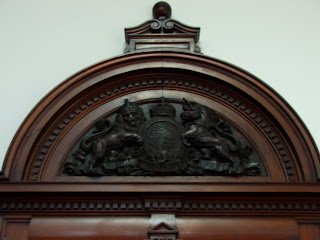 Posted by The Cumbrian Castle listing. at 8:54 pm