The buildings that make up Brougham Castle.

There are a number of well preserved standing remains at Brougham, which deem the castle a worth while visit. From the road, the remains can be seen standing to their original height in some instances. Passing through the English Heritage welcome centre, the gatehouse presents itself as the logical place to start the tour: 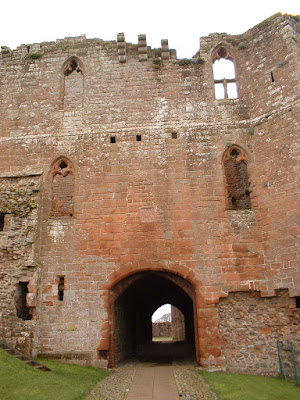 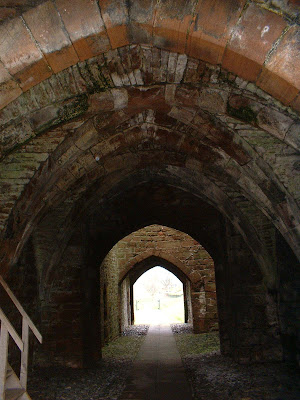 The inner gatehouse, which is the original entrance to the castle, was a self-sufficient structure. It was fitted out with its own portcullis and gates. It was in around 1300 that Robert Clifford decided that the outer gatehouse was required…..and addition designed to make the castle even more impregnable. Both of the gatehouses are of two storeys. 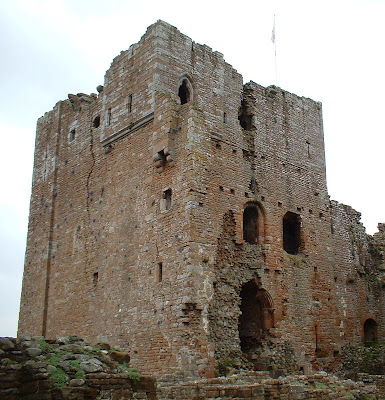 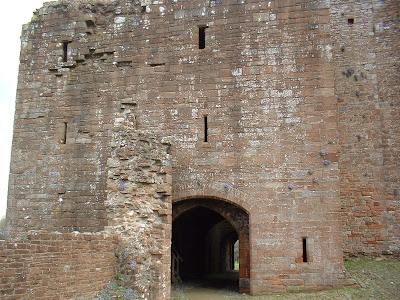 The courtyard that lays between the two gatehouses, was equipped with lodgings on the river side of the buildings. This area would have acted as a ‘murder zone’ in the event of an attack! If those attacking had managed to break through the outer gatehouse, they would have found themselves under attack from the walls around the courtyard before they could lay siege to the second or inner gatehouse. The chances of getting through the courtyard were therefore low. 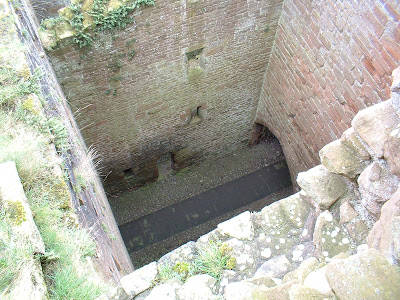 The inner gatehouse is well equipped with observation points for the postern that is cut into the Western of the two outside buttresses. This postern, or defendable gate in the wall, would have provided a way in and out of the castle when the outer gatehouse was closed. A flight of stairs led to a watchman’s chamber from the courtyard at the foot of the inner gatehouse. From here, he would have been in complete control of the portcullis and gate.

The courtyard would have been cobbled pretty much as it is today….providing good footing for horses and men in wet weather.

Approaching the South West corner of the castle’s courtyard, there is another postern gate. This one crosses the moat outside the castle’s walls and is much older than the causeway, which was probably constructed for Lady Anne Clifford as a quick easy way in and out of the castle.

The Tower of League sits at the South West of the castle, and was built by Robert Clifford in around 1300, the same time that he built some of the stone curtain walls. 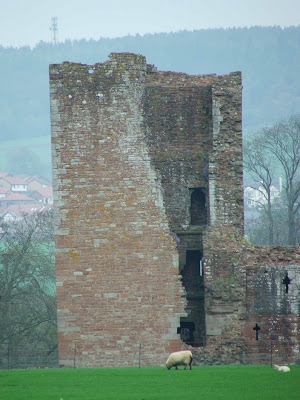 The tower would not only have provided protection from attacks, but would also have provided a place of refuge if attackers had managed to enter the castle and make their way through the triple protection of the gatehouses and their courtyard. 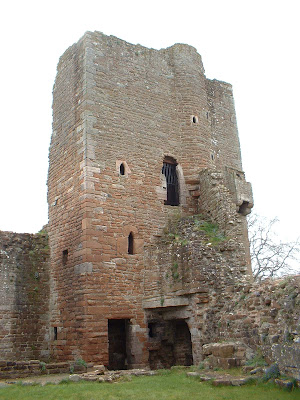 In 1723, the tower was referred to as the Tower of Liege….literally meaning the Tower of Lordship. It would also have provided luxurious apartments. Each of the floors would have constituted a single chamber, with their own latrines and fire places.

Lodgings for the garrison:

The garrisons are built along the South curtain wall, and would have been the castle’s communal rooms, where troops garrisoned at the castle would have eaten, slept and prayed. 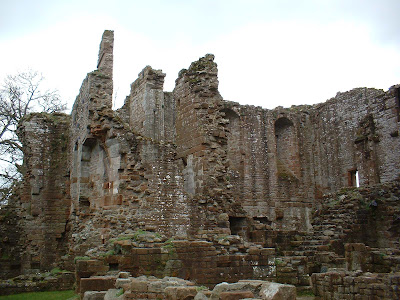 The first room of these buildings would originally have had three storeys, although this range were reduced to just two sometime in the past. No date has been attached to the building of this range, but it was probably built by Roger Clifford in response to an increase in Scottish raids, possibly in the 1380’s. These buildings provide clear evidence that the castle was regularly garrisoned with a formidable array of troops.

The Chapel is also situated against the South curtain wall, and was probably built by Roger Clifford, again in the 1380’s. Documents from 1385, state that Roger Clifford had 30 men at arms (cavalry) and 60 archers garrisoned at the castle. This was in addition to an undisclosed number of other troops who were there already. In the 14th century, there may have been as many as 100 men stationed at Brougham castle. 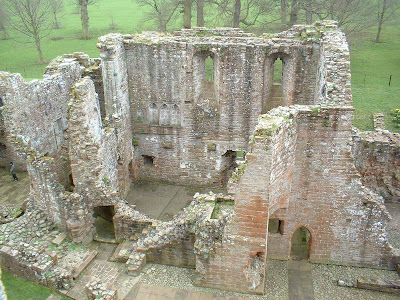 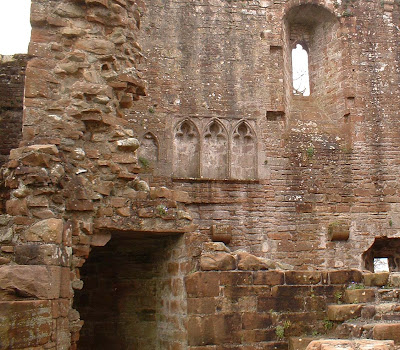 The most visible remains of the chapel today, are the three arched sedilia windows set high up on the wall. Although they’re all bricked up, they’re well preserved. The left of these windows, the small piscine can still be seen, set into the wall. This small recess would have been used to wash the holy vessels in which the sacrament would have been served.

All that remains of this building now, is the uncovered foundations. The covered passage would have provided a corridor along which the Clifford family would have walked to the chapel

The inner courtyard is quite a large area. It contains one of the castle’s wells. Beyond this stood the kitchens, built close to a water supply for obvious reasons. A causeway across the Roman fort ends against the wall here, probably indicating that it was there before the curtain wall was built. 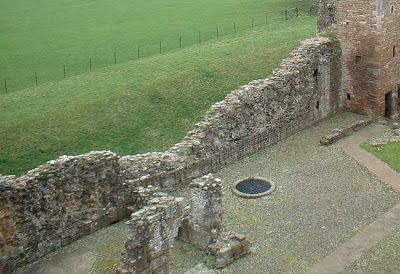 The kitchens are situated at the South East corner of the castle. Entering the kitchen at the present level, takes you into what would originally have been the kitchen’s basement. The next room would have been the castle’s second hall, built by Roger Clifford. The stone now embedded high up on the external wall of the outer gatehouse, and inscribed “Thys Made Roger” would originally have been set in the entrance to the hall. 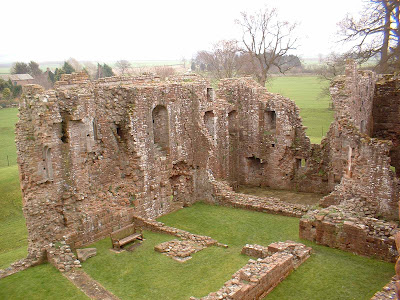 The windows on the outside of the hall, looking across the Roman fort, are unusually large for a defensive wall. It’s therefore probable that they would have been covered by wooden shutters when required.

This room would have been the castle’s original hall. It was essentially the private residence for the lord of the castle. The only remains of the Great Chamber now, are the footings at the base of the keep.

In the 13th century, the Great Chamber would have been a massive three storeyed building with a good sized basement.

The Keep is the oldest part of the castle still standing today. The lower three storeys of this massive structure are dated to around 1175, taking into account their similarity to other buildings of this time. There’s no solid proof of this dating however, as Robert de Vieuxpont’s documents indicate that the castle was not started until sometime after the 1320’s. Robert either employed an elderly stone mason with old building skills and views, to build the Keep, or he had a penchant for old building styles. 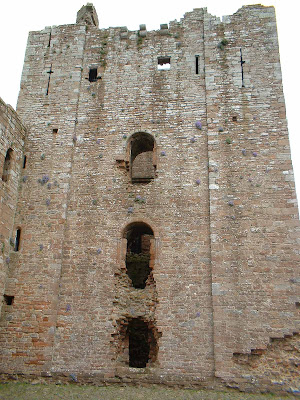 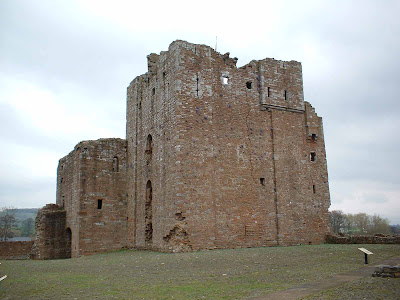 The Keep is entered on its East side…..meaning that if it was attacked, the attackers, if they’d made it past the gatehouses and the courtyard in-between, would still have had to fight their way around a corner. All the while they would have had to fend off attacks from high above. After about 1300, and would be attackers who got this far, would also have probably come under attack from across the courtyard from the Tower of League in the South West corner. Even then, access to the Keep was blocked, as the doorway was on the first floor and covered by a substantial building.

The earthwork remains of the walled garden built by Lady Anne Clifford, can still be seen cutting through the Roman fort. The gardens were planted to ensure that the castle could produce as much of its own food as possible.
Posted by The Cumbrian Castle listing. at 9:46 pm