Kendal, The Rainbow Tavern\Horse and Rainbow


Situated almost opposite the top of Lowther Street, the Rainbow is one of a number of public houses that stretch from here to the bottom of Windermere Road. It is another fine example of one of the older public houses that has stood the test of time, with some records mentioning an inn here as far back as 1638. 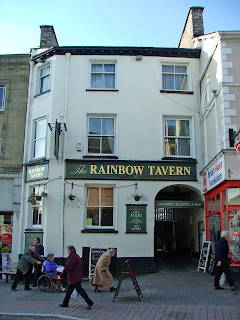 Indeed....1638 is when the inn is first mentioned, along with its Catholic landlord, Oliver Platt. Oliver is mentioned in Cornelius Nicholson's 'The Annals of Kendal' a fine book that details the historical streets and buildings of Kendal. Cornelius tells us that Oliver was the landlord a tthis time, and that there was a fine oak table and some oak panneling bearing the inscription 'OP AP 1638' which were discovered when the building was being rennovated. 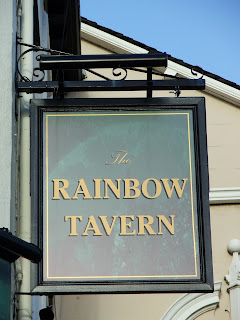 In 1716, the building was owned by Robert Stephenson, and with other neighbouring properties formed a charitable trust. The profits from this trust were distributed annually to local poor families with a small amount being given to the local Catholic priest of Kendal. 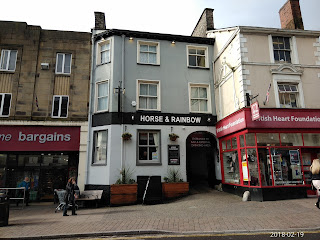 Again it is Cornelius Nicholson that confirms this arrangement, stating that the Stephenson Trust was set up for the poor and destitue of the town. Stephenson died in 1723. He left a number of properties in his will, one of which was Dodding Green, which, it was stipulated, was to be used for the housing of Catholic priests from the district. Most of his properties and estate, were left to the Catholic church.

In 1795, the inn was the meeting place of the New Union Society.

In 1881, the inn seems to have changed its name to simply 'Mrs Lawson's'. It wasn't until a James Harker took over as landlord, that the inn gained its first sign. James is listed as the tennant and landlord between 1829 and 1856. Whilst he was the landlord, the premises were used by Lodge Number 151 of the Freemasons as a meeting place. It's no surprise then, that James Harker was a leading Freemason in the area.

During 1875 and 1875, John Robinson, warden of the Unitarian Chapel on Branthwaite Brow, was the licensee. Records of this time, state that the Rainbow offered stabling for a staggering sixty hourses!

Other notable landlords, are William Robinson, who was licensee until 1896. John Graham, who took over on the 1st of December 1906, with Messrs. Truman Hanbury and Buxton of Company of London, who took over in 1945, placing Charles Harriman as the landlord.

These days, the Rainbow, or Horse and Rainbow as it is now known, has been refurbished and is open for business.
Posted by The Cumbrian Castle listing. at 11:40 am

In 1871 the Rainbow Inn was run by David Lipsett and his wife Mary
My Great great grandmother was a servant for them.
Its on the 1861 & 1871 census. As Inn Keeper. 1851 he was the Superintendent of Police for Kendal !
He came over from Southern Ireland.