Not the greatest photos I've ever taken of a an important site, but considering I was on the top floor of a double decker bus, I think they're OK, and I'm happy that I managed to capture the redoubt in the distance. The 19th century shore fort is situated on Shoreham beach, a sliver of land that stands between the mainland and Shoreham harbour. 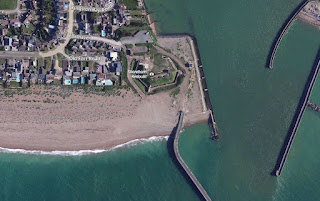 It stands at the far East end of Shoreham beach, and was built to protect the entrance to the West and East sides of the harbour. Plans for a fort here, were put forward in 1850, at a time when a French invasion was thought very likely. The fort was completed at a cost of around eleven thousand pounds, and was ready for its garrison by 1857. It is also known as Shoreham fort, and Kingston Redbout.

Above. The fort and the searchlight tower from the A259.

This area of the Sussex coast, had traditionally been undefended.....there was never a pressing need to fortify the harbour, such was the poor silted state of the waters here, and, with other areas along the South Coast considered easier for invading armies to disembark from their ships, no fortifications were built or defences provided.

Above. The fort and the searchlight tower, again from the A259.

However, as Napoleonic France extended its influence across Europe, there was a fear that newly built iron, steam powered battle ships would be able to easily defeat the Royal Navy. Forts were raised at Bognor, Selsey and Littlehampton,, and lastly at Shoreham, to provide an element of protection against any French aggression.

The fort is constructed in a lunette (half moon) shape, with a gun platform that sits some fifteen feet about sea level. The gun platform and ramparts were defended by a ditch with a carnot wall; a wall that was built in the bottom of the ditch, with loop holes for defenders to stop attacking forces from traversing the external defences. The fort was also equipped with three caponiers; buildings that provided cover for riflemen to fire at attackers along the carnot wall, within the safety of these brick buildings. Barracks were built to the rear of the fort, and provided housing for thirty eight men.

By 1873, the fort was deemed to be out of date, and plans were put forward for a replacement to be built on the site.....the plans however came to nothing, and in 1886, the fort was provided with two 80 pounder and three 64 pounder guns.

The fort found a new, cultural lease of life in the early 1900s, when it was used as an open air film studio, with four films made there in 1914.

As WWII loomed, the fort was armed with two six inch guns which were housed on the nearby beach, and searchlights. The barracks were demolished after the war, with a coastguard tower replacing it.

Check out the Shoreham Fort website for loads of information, including a great floor plan of the site.
Posted by The Cumbrian Castle listing. at 5:56 pm