Never on the normal round on a Friday or Saturday night, I think I only frequented this a few times during lunch time during my years at Bridge Mills whilst working for Prolific Life and Pensions\Scottish Provident. The inn closed a number of years ago now, and has joined the ranks of first class redevelopments. It now houses a number of flats.

In the early 19th century, wool merchant James Gandy owned a large estate comprising of land at the Northern edge of the town. Development schemes were undertaken on Longpool, where Union Row, a terrace of two storey cottages was built. Number 15 was the Victoria Tavern, and it was built in conjunction with the Kendal Union Building Society in 1820. Behind the tavern and the cottages, runs Stock Beck, which was very prone to flooding, and producing the ‘Long Pool’, one of the causes of so much flood damage during Storm Desmond in 2015. Number 15 was once called The New Crown Inn, probably relating to the coronation of Queen Victoria in 1837. 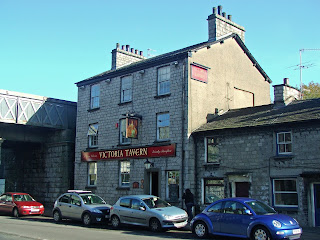 Above. Victoria Tavern in 2006

By 1854, the inn was being used as offices by the Kendal and Windermere Railway company. The railway had opened by 1847, and the offices served the temporary station that had been built there. When the station was replaced in 1861, the offices were sold off, and in 1864  number 15 became a Temperance Hotel owned by Edgar Robinson, and occupied by Bindloss Woof. Sometime between 1864 and 1869, the building again became an inn, the Victoria Tavern. 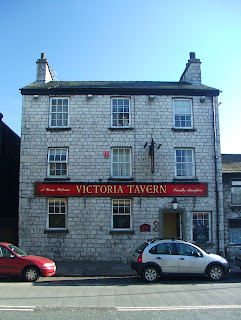 The tavern was known as on of the four surviving Jerry houses in Kendal. These sold only beer, ale and porter. In a police report of 1892, the tavern, under the ownership of George William Howells, was recorded as having three drinking rooms, five bedrooms, no dining room, no seating and no stabling. Since 1932, there were only 5 landlords in 65 years.

The current swinging pub sign replaced a larger one that pictured Victoria’s head and shoulders. This sign was so large it had to be fixed flat to the front of the building. It was to be sold to a buyer in America, but was not taken. For a time it was fixed to the rear of the building.....whether it's still there I'm not sure. 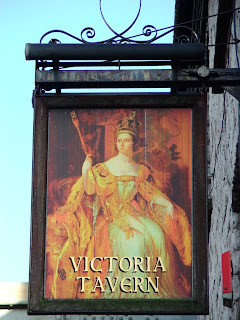 Above. The Victoria Tavern's sign...not the original.

The inn still possesses the ornamental windows of Duttons Blackburn Brewery, which took over the inn from local brewer Jonas Alexander between the late 1940s and 50s. 1950, new ladies and gents toilets added to the ground floor. In 1954, the ground floor living area was made into a smoking room. The inn ceased trading sometime before 2015.
Posted by The Cumbrian Castle listing. at 10:43 pm