The Cock and Dolphin
Kendal
Cumbria


The Cock and Dolphin once stood watch over what is almost a crossroads....where Milnthorpe Road meets Kirkland, Lound Road and Aynam Road. The inn, once a popular haunt on a Friday or Saturday night stomp around town, is now flats, converted a few years back, sympathetically retaining many of the features that drinkers around town had become familiar with. 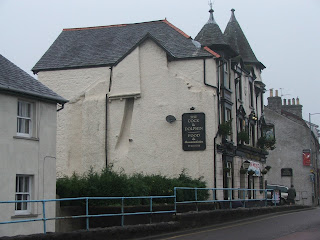 Above. The Cock and Dolphin looking North from Milnthorpe Road, 2006.

Brendan Jameson, ex leader of SLDC, conducted a large amount of research on Kendal's inns and public houses. When the Cock and Dolphin was earmarked for development the company involved originally had plans to demolish and replace the existing building. At first it was a foregone conclusion that this was going to happen....until Brendan got involved. The only protection the building had, was that it was just inside the Conservation area that envelopes the town centre....it wasn't listed and therefore didn't enjoy any or much legal protection. Somehow, Brendan managed to persuade the developers to retain the building, and work with the existing fabric that was already there. Luckily for us, the familiar, if jaunty, building has survived, and those of us that remember 'boozing' around town in the late 1990s and early 2000s, are no doubt misty eyed when we see the familiar bartisans at the front. 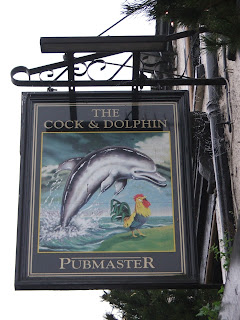 Above. The old pub sign....alas no more!

Brendan told me that the name may Cock and Dolphin may have come from the dolphin on the armorial shield of the Dauphin of France, and the Cock connecting both to the heraldry of the French royal family....but, with a smile on his face, he said he had no idea how what the relation was between the French royal family and a pub in Kendal. 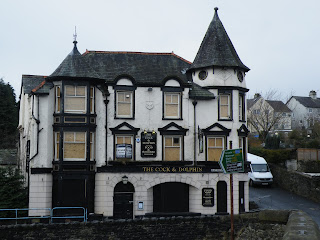 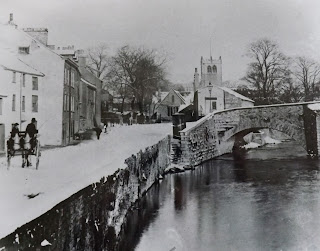 Above. An oblique view from Milnthorpe Road. Note the lack of bartisans.

The 1892 Kendal Borough Police Returns state that the inn had three drinking rooms, four letting bedrooms and a dining room that could accommodate 30 people. There was also stabling for five horses. 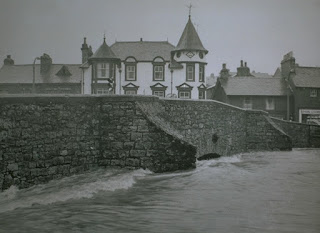 Above. Nether Bridge and the Cock and Dolphin. 1954 floods.

A double stable with a hayloft survived for a numbe of years at the rear of the inn, as did another building, which was used as a pig sty during the Second World War.

Between 1873 and 1898, Cleasby Chorley was the landlord. Cleasby’s parents ran the Pump Inn at the top of Finkle Street until 1874, four years before it was demolished. Cleasby sold the inn to Whitwell and Mark and Co ltd for £5100.

Around 1898, permission was given for the inn to be rebuilt. Toilets were added at this point, as before this, anyone needing the toilet, had to cross the road to use the privy on the opposite side of the road. At this time, Henry Wiper was the licensee paying an annual rent of £100.

In 1983, a change of name to the Queen Katherine was proposed, but the idea was dropped.

This is another fine example of yet another Kendal inn being saved, and preserved, albeit with a new lease of life.
Posted by The Cumbrian Castle listing. at 2:04 pm