Castle Howe seems to be Kendal's sad and mostly forgotten castle. Probably built in the early 1090s, the remains of the motte still tower above Kendal sat below it in the river valley, though its bailey area has largely been destroyed and dug out. Some of the earthworks still remain at the North, South and West of the motte; ditches and banks can still be seen here. There are only a few old photos of Castle Howe in the public domain, a few of which I've managed to lay my hands on, and are shown here.

Above. Castle Howe as it appears today.

These days the castle is not really on the tourist trail. Any information boards that used to be here have long since been vandalised and removed or stolen. There are plans afoot though for this situation to be remedied. Kendal Civic Society and Kendal Town Council recently announced plans to clean the area up and to re-introduce information boards. Perhaps we'll see more visitors to Kendal's first castle once  again. 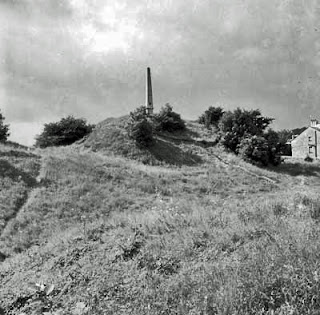 Above. Old photo of Castle Howe.

The photo shown above clearly shows that the tree cover has increased over the years. It's a shame that it's not this clear today. During the Spring and Summer months the tree cover is such that it's difficult to see the form and layout of the motte and its surrounding earthworks clearly. 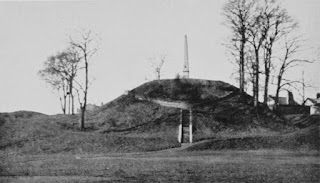 Above. Another photo showing the motte with little tree cover. 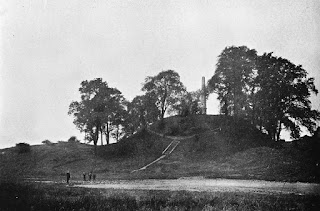 Above. This must be a later photo - the tree cover has increased.

Castle Howe is well worth a visit. Don't just look at the front though, from the old bowling green....venture around the back of the motte and take in the ditches and banks....only here will you get a real idea of the immense size of this great Cumbrian motte and bailey castle. Ignore the litter and the mess that you'll find here...I know it may be difficult, but to fully take in the form of this 900 hundred year old castle, you just have to venture off the beaten track.

As I come across any more old photos of Castle Howe, I'll post the photos here.

Posted by The Cumbrian Castle listing. at 12:43 pm