Above. View of the Doon Hill from the South.


From a distance, the tree covered hill is fairly inconspicuous, however, when viewed close up, there are still the feint signs of terraces, banks and ditches at the summit. The fort occupies a great defensive position....some 300 feet above sea level, and is one of a number of forts that stretches from Trostrie to the North, Campbelltown, Compstonend Castle Hill right down to another Doon Hill on the Northern shores of Kirkcudbright Bay. 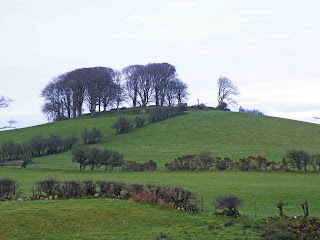 Above. A close up view of the fort.

The summit of the fort measures around 82 by 78 feet. It is crowned by a central disc, defined by a slight earthen bank and the eroded remains of a further double trench and a single rampart. Only from this side of the fort, ie, the South, are the ditches and banks still visible. I'm not sure what the access rights are to the fort, but it can certainly be viewed from certain points around the village.
Posted by The Cumbrian Castle listing. at 12:56 pm