The Castle Howe monument stands on the summit of the motte of Castle Howe, Kendal's Norman castle, to the West of the town. The monument was designed by Francis Webster, and bankrolled by William Holme. It was erected to celebrate the 1688 revolution, whereby King James II of England was overthrown by Parliament, and William of Orange, the Dutch Stadtholder, ascended the throne as William III along with his wife Mary II. 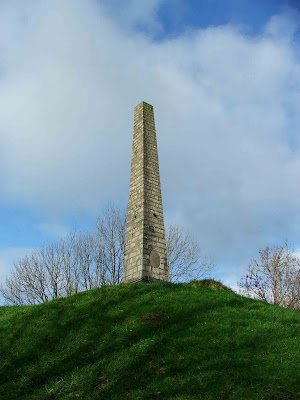 Above. The monument from the foot of the motte.


The monument was erected one hundred years after the Glorious Revolution. It's apt that the inscription mentions 'Sacred to Liberty'. The Liberty quoted here relates to religious freedoms slowly beginning to creep into society....and Kendal has a long history of Dissenters....Catholics, Wesleyans (Methodists), Quakers (Friends), Zionists and many others. 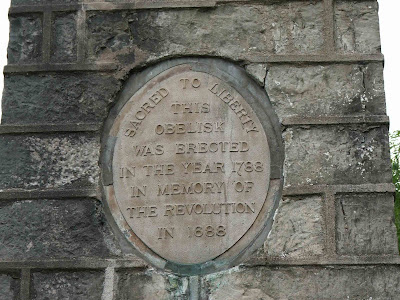 Above. The plaque on the East face of the monument.

Above. Another view from the foot of the motte.

The monument wasn't a particularly well liked addition to Kendal's skyline. It was noted in certain circles that the shaft of the monument was too short, and it gained the nickname "Bill Holme's Bodkin" (after the man who bankrolled it)

The base of the monument was also found to be of poor quality, and either from the weather or the idle hands local youths, it started to deteriorate. Unfortunately, repairs that were undertaken gradually erased an engraving that had been placed here, once reading "that no foreign prince or potentate has, or ought to have, any power, civil or ecclesiastical, within these realms". 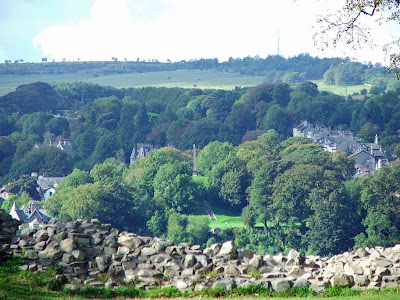 Above. The monument and the motte and bailey castle from Kendal Castle to the East.


The monument has developed a gentle lean over the years, and this is still evident today. The monument is clearly visible from Kendal Castle to the East, especially during the Autumn and Winter months when the trees are bare.
Posted by The Cumbrian Castle listing. at 7:16 pm