Vicarage Drive Motte number 1
Kendal
Cumbria
This mound lies to the South of Vicarage drive, and consists of two areas of rising ground. The last two photos show a preliminary mound, rising to around fifteen feet in height. The second mound is hidden by the tree cover, shown below. This mound was found to be around forty to fifty feet high. 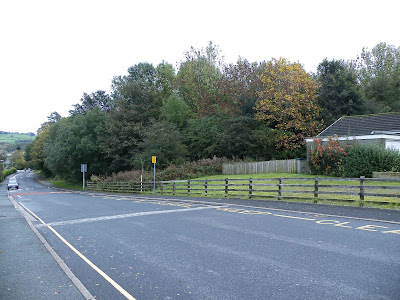 Above. A view of motte number 1 from Vicarage Drive.
There was no trace of any ditches within the wooded area, although it was in such an overgrown state it would have been extremely difficult to see any last remains of any type of defensive infilled ditch.

Above. Motte number 1 looking East.
The photos above and below show the lower, fifteen to twenty foot bank that runs around the Southern and Western sides of the mound. Could this have been an additional bank thrown up to provide additional defences to this site....or does it represent the remains of a bailey area?

Above. Motte number 1 looking North.
I would say, that of the two Vicarage Drive mounds, this would be the most likely to represent any form of motte and bailey castle or 'pre-conquest administrative centre'.....though again, early maps show nothing of any note in this area, and local historical documents don't mention anything at this end of town. I would have thought, that had there been an important site here, perhaps John Speed would have noted it on his map of 1620, but there is nothing here at all. Both of these mounds are intriguing sites...but it is hard to find any persuasive argument for these mounds being anything other than glacial mounds.
Posted by The Cumbrian Castle listing. at 6:42 pm