Only a tiny scrap of what is perhaps the stair tower survives of this 16th century tower house. Although this photo will never win any competitions, and would most likely come last or be disqualified for being so poor, it's all I've got at the moment...caught in an instant by my good wife!!(thank you TJ) 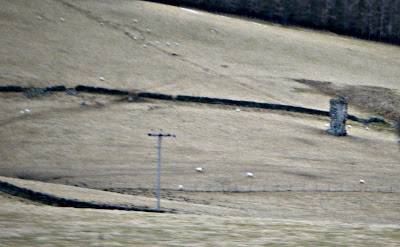 This blink and you'll miss it ruin, lays in a field to the West of the A701 as it runs through the Tweed Valley, a beautiful drive that takes in some of the Scotish Borders most photogenic country side. The ruins stand to around nine metres tall, over a wall that survives to around four metres thick. As mentioned above, they probably represent the remains of the North East angle of a rectangular stair turret or tower. The tower was probably built by the Tweedies of Drumelzier who were land owners in the area from as early as the 1320's. The tower can be seen from the road, and it's probably possible to get a better view if you park up, although it is on private land and cannot therefore be approached.
Posted by The Cumbrian Castle listing. at 8:45 pm