Ulverston police station (Neville House) lays just off the A590, sandwiched between The Ellers (A5087) and Neville Street. The police station occupies the site of Nevill Hall, also known as Neville Hall, and Nevyll Hall, a medieval hall that was said to have had a tower attached, and is traditionally said to have belonged to the Neville family, first being mentioned in around 1347. 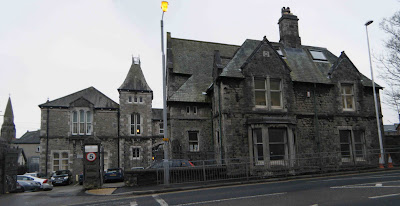 Above. The police station looking across County Road.
The buildings on the site of Neville Hall, perhaps including the original hall and whatever was left of the tower, were eventually used as Ulverston's Work House, taking over from the Poor House that was situated elsewhere. This lease of life only lasted until around 1838, when the sheer number of people housed here meant that a purpose built building had to be erected. Some parts of the hall and its buildings were demolished to make way for the new Work House, whilst others were incorporated into the building. The tower was probably removed entirely at this stage, if it hadn't already been demolished beforehand. The hall survived for a while longer, until it too was dismantled in 1881, and the Police Superintendent's house, shown below, was built on the site seven years later in 1888. 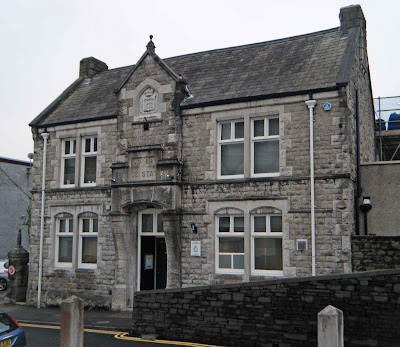 Above. Neville House from Neville Street.
It's thought that Edmund Neville built the hall and its tower when he obtained a grant of the manor of Ulverston from Lawrence de Cornwall. The manor remained in the Neville family into Queen Elizabeth I's reign, until it was forfeited to the crown in 1569 after the Neville family instigated the Northern Rebellion (see this link for more information) The hall was sold to the town's leaders in 1753, and used as the Work House, as mentioned above, for the grand sum of £163.
A link to a photo of Ulverston Work House.
Posted by The Cumbrian Castle listing. at 7:01 pm