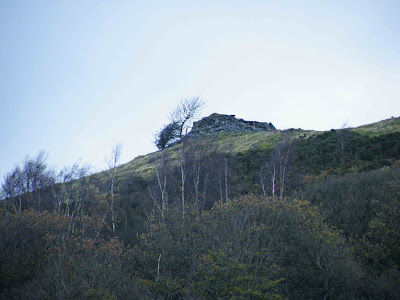 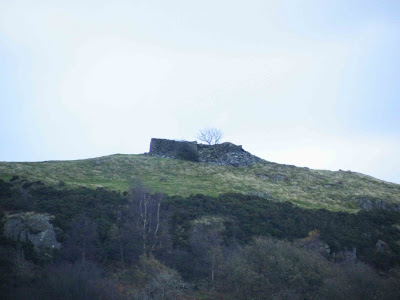 I think the next step is to visit the ruins here at High Newton, and to confirm the type of building that can just be seen from the nearby main road. There are a couple of photos of the ruins here....but they don't really tell us much.
Posted by The Cumbrian Castle listing. at 5:52 pm

Presumably the name bishops tithe is a post reformation name dating from the creation of the bishopric of Chester -before the reformation this was the see of of the archbishop of York so may well be land originally in the hands of a abbey.

I mean 'an' abbey. I better get this right or the spelling gestapo will be down me neck.

According to local custom, the ruins on Dixon Heights and the hill on which they stand are known locally as 'Colour Pole' The name derives from the Napoleonic Wars, when the site was a lookout station, manned my local militia, who hoised their colours when they were on watch. The site has been used since Roman times - a Roman ravestone, now in Lancaster Museum, was found about 200 yards from the ruin. Bill Lloyd