Situated on the A595, the small village of Kirkby In Furness sits nearly eight miles North West of Ulverston, looking out over Duddon Sands. The hall shown below, is sited to the North of the village, next to the old railway. The hall seems to have been the subject of much debate regarding its defensive credentials....with some historians hinting that there may have been an earlier building on the site, possibly a pele tower or other defensive tower, or that the existing hall and its buildings, contain the remains of a pele tower or other defensive tower. 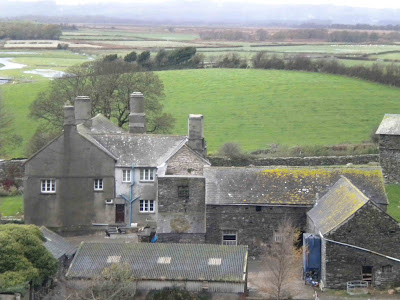 The building seems to contain the remains of two halls. The first hall contains a newel in the South Eastern corner, possibly indicating that there was a tower here....possibly the remains of our original pele tower. The second hall, to the East of the building, contains a very thick North Western wall, also possibly the remains of an earlier, defensive (?) tower. The East wing dates from about 1450, whilst the West wing dates from around 1530. The photo above, shows the South Eastern face of the hall. The newel lays beneath the middle of the three largest chimneys, and is probably the oldest part of the hall. The small, roofless building in the foreground, contains a number of bee boles in its South Eastern external wall. The West wing of the hall, contains the chapel, which was accessed through a wooden trap-door in the dairy passage. This small room still retains its wall paintings in ochre and black, depicting trees, animals and the ten commandments. The hall was originally called Cross Hall....a name it gained due to a preaching cross that was mounted in the South East angel of the courtyard.


The earliest building here was the home to the Kirkby family....dating from sometime in the 12th century. It is unlikely that anything remains of the original buildings. The Kirkbys were an influential land owning family from the 12th century right through to the 18th century. John Kirkby (born around 1204) was a judge on the King's bench, as well as Baron of the Exchequer. Richard Kirkby (born 1624) was Governor of Chester Castle. The Kirkby family were also Sheriffs of Lancashire and Justices of the Peace. The family's downfall was as a result of their support for Charles I during the Civil War. It's unusual that they managed to retain most of their lands....especially when considering the example of the Phillipson family of Kendal who lost both property and personal possessions for their Royalist sympathies!! The hall finally passed from the Kirkby family in 1719, into the hands of the Cavendish family, who in turn held the hall until 1771. Not easily accessible, but can be viewed from nearby common land.


Many thanks to Nick Cornah for the photo. Check the link for some great photos of the hall:
Posted by The Cumbrian Castle listing. at 7:27 pm