The small market town of Helmsley lays about 10 miles West of Pickering on the A170. This road makes a peculiar Southerly route through the village after travelling West from Pickering. As you pass through the village the remains of the castle can just be made out over the roof tops.

Built by Walter Espec in the early 1100’s, the castle is today represented by a wide range of surviving earthworks, masonry and upstanding walls and buildings. The most spectacular and recognisable of which has to be the half destroyed keep.

Above. Looking South across the remains of the old gatehouse, into the courtyard.
A good place to start when exploring these remains, are the remains of the Northern gatehouse and barbican. Today a wooden bridge spans the double ditch, taking you to the D shaped remains of the gatehouse….now standing to around two feet in height. This structure would have been protected on the outer earthen bank by a 13th century barbican…further protection for this, the original entry into the inner court of the castle. The gatehouse probably dates from the early 1200’s, as does most of the outer stonework of the castle, ie, curtain walls (excepting the Southern defences including the 14th and 16th century gatehouse here) The ditch here is around 30 feet deep, and is a similar depth for its complete circuit of the castle…well preserved and intact.
Once over the modern bridge, the whole of the inner court is laid out before you. To the left, the keep can be seen (more about this faux keep later) the scrap of the 13th century chapel, numerous low footings of buildings, and to the right, the West range and the de Brus tower, along with the remains of the Hall and various towers.

Above. Looking North East towards the ruined keep.
The keep is a monumental structure, still standing to around 5 storeys tall. I say half, as only half of this towering building now stands on the edge of the moat. The outer walls of the ‘keep’ were destroyed along with most of the upper levels of the curtain walls on the orders of Oliver Cromwell’s government, after the castle was surrendered to Sir Thomas Fairfax in November 1644 after a three month siege.

Above. Looking North across the courtyard towards the keep.
This left only the inner shell of the building remaining. What is known, is that this building was in fact not the keep, but a tall chapel with an apsed (oval) projection out over the first defensive ditch. 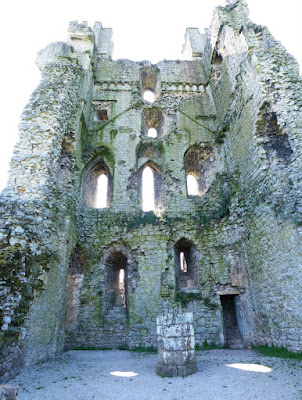 Above. Looking into the ruined shell of the keep.
This chapel formed the core of the castle built in the early 1200’s, and can be entered from the inner court. Looking up at the now empty shell, its immense size can truly be appreciated.

Above. Looking through the South Eastern, and more recent, gatehouse.
Moving South from the ‘keep’ the Southern gatehouse still survives to a height of around 20 feet. These immensely thick walls are part of the original castle from the early 1200’s, and lead onto the 14th and 16th century gatehouse that extends across the double ditches. 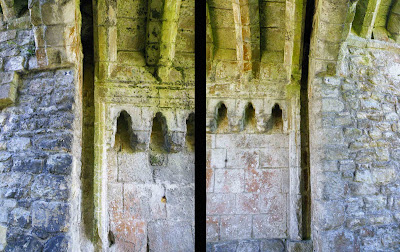 Above. The portcullis grooves in the South Eastern gatehouse.
The outer gatehouse, or barbican, still retains its portcullis grooves, indications of the defences employed here. There are the intact remains of two D-shaped towers on either side, with standing portions of curtain wall, and then two more towers, one extending over the first ditch, and the other following the line of the curtain wall. 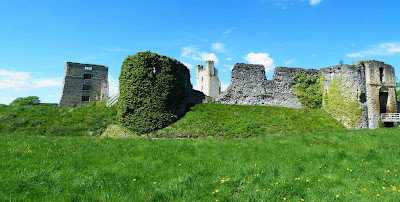 Above. A view of the buildings on the South Western side of the castle.
This latter tower would have provided defensive line of sight down the Western curtain wall, and out over the Southern portions of the outer court. Here the rocky outcrop that the castle is built upon, can be seen beneath the curtain wall, indicating the strength of the site up on which the castle was built. 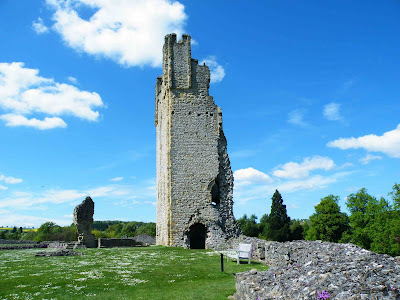 Above. View of the faux keep from the South, showing the amount of damage done upon Cromwell's orders. 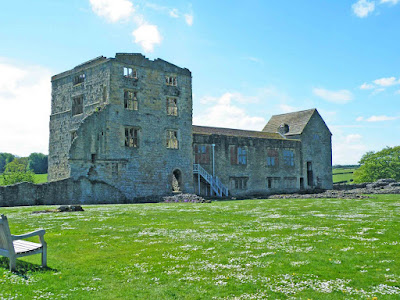 Above. The original solar tower on the South West side of the castle.
The building to the West of the inner court, consists of the castle’s original keep…the much altered early 1200’s solar tower. This tower was largely re-built on its Southern and Western walls during the early 1300’s. Whereas originally it would have been a stocky, probably almost windowless tower, sufficient as a last place refuge, it became, over the years, a lofty and comfortable tower, sporting a number of windows (including at ground level) suitable for accommodating important residents and guests alike. This tower lacks its roof, but is accessible. It sports an impressive pair of draw bar slots in the entrance wall, and clear indications of the comfort employed for those living in the castle. There are a multitude of fireplaces and indications that the tower had at least four floors. The whole of this castle will take you a good hour at the very least, to walk around...there are simply loads of remains here. I'll follow this up with a history at some point, which will give me the opportunity to add a few more photos.
Posted by The Cumbrian Castle listing. at 4:27 pm

So what was the 'faux keep'? Just an over-large tower?