Newton Reigny Manor
Newton Reigny
Cumbria
Situated behind the small church of St John in Newton Reigny, these earthworks cover quite a large area, and are still very well defined. They are roughly rectangular in shape, and consist of a raised platform, some 2 feet high, that backs onto the church grounds. The remains possibly represent the site of Newton Reigny Manor.

The earthworks are very well preserved, especially as there is a small housing development that borders the West side of the bank.

The church of St John has a yard that backs onto the earthworks. There is every possibility that they are connected. The church dates from the early 1200's, and of this period, the chancel arch survives. Other parts of the church date from the 13th century. The earthworks can be viewed from the roads to the North and South. Excavations apparently revealed the remains of building, including a flagged floor. This could have been for housing animals, or could indicate the site of a residence. The de Reigny's, after whom the village is named, were well known for raising men for raiding the Southern borders of Scotland. A map of 1864, shows the earthworks marked as Camp (remains of) 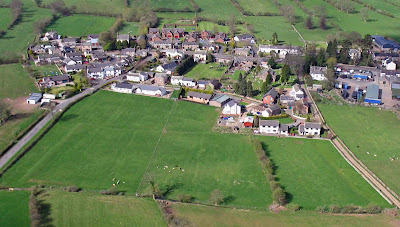 This photo shows the sheer size of the enclosure, sandwiched between roads, housing and field boundaries. (Photo courtesy of Simon Ledingham)

For more of Simon's photos

Posted by The Cumbrian Castle listing. at 9:35 pm