Penrith castle sits opposite Penrith station, sandwiched between Ullswater Road and Castle Terrace. With its Southern position in the town, it was the last of four fortified buildings in Penrith (the others being Hutton Hall, the Two Lions inn and St Andrew’s church) 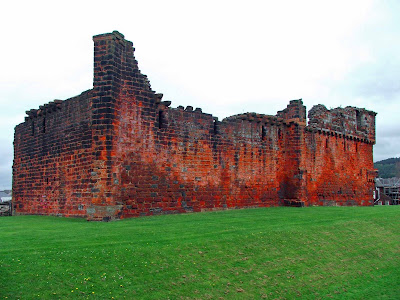 Penrith castle is probably one of the most recognisable castles in Cumbria….a simple square plan castle of red sandstone, sitting on top of a low motte and surrounded by a dry ditch. The castle was originally a small pele tower, the remains of which exist to about chest height, and with a vaulted cellar below the flat platform that marks where the thin tower walls would have stood. 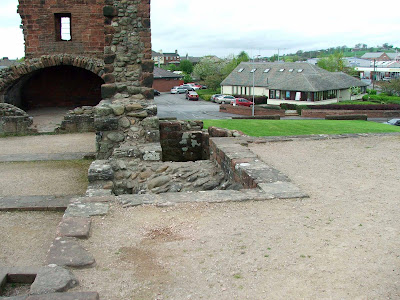 All that remains of the Strickland Tower is the platform from which this photo was taken. 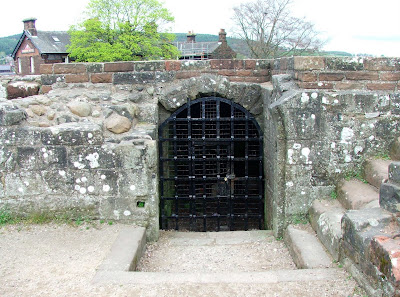 This is the vaulted cellar beneath the remains of the Strickland Tower.

Penrith was always at the forefront of the border wars between England and Scotland, within easy reach of raiding and invading Scottish armies, and sometimes neglected by the English. In 1242, the manor of Penrith was in the guardianship of King Alexander of Scotland. The manor was granted to him in 1237 as part of a deal struck in York. The terms of the agreement were that King Alexander should give up all rights to Cumberland, Westmorland and Northumberland for an annual payment of £200 from the English crown. When Alexander died, the manor was inherited by John Baliol, but when he and Edward I quarrelled, the manor was seized by the English crown and granted to Anthony, Bishop of Durham. In 1345, in revenge for the loss of the manor of Penrith, a Scottish army crossed the border and burnt Penrith and the nearby towns of Salkeld and Sowerby. The following year (1346) a licence to crenellate was granted to the town, allowing for town walls to be constructed. The licence reads "Licence for the good men of Penereth to crenellate their town." (many thanks to Philip Davis) How much work was done on these defences is not known, but nothing now survives of them.

Documentation tells us that John de Deux, Duke of Brittany granted land at Penrith, by way of a lease, to William Strickland. Included in this grant, was the right to build a fortalice, or a small fortification, which the Duke of Brittany held the right to use when he was in the area. In 1397, William Strickland received license to crenellate the fortification from Richard II, and a pele tower was built. The exact wording of the license is as follows: “quandam cameram suam in villa de Penreth. Licence for William Stirkeland, clerk, to crenellate his chamber in Penreth in the March of Scotland.” There is some confusion over the exact location of this pele tower though. Some documentation seems to suggest that the tower is the one that still remains at Hutton Hall, whilst most historians agree that the license relates to the Strickland Tower at Penrith Castle. This tower is situated at the North East side of the castle, and as mentioned above, survives only to chest height. The entrance that leads into the courtyard today runs alongside the platform that this tower would have originally stood on. In 1399, yet another license to crenellate was granted, this time to build a barmkyn around the yard. The wording for the license is as follows: “Licence for William de Stirkeland, to whom the king lately granted licence to crenellate with stone and lime a chamber in Penreth upon the March of Scotland, to make a mantlet of stone and lime, join it to the said chamber and crenellate the same and so hold it for ever, in aid and succour of the said town and adjacent country. The roll recites the previous grant thus: "nuper," &c., "concessimus," &c., "licentiam," &c., "kernellandi quandam cameram in villa de Penreth March. Scociae. Nos de uberiori gratia nostra concessimus" &c., "licentiam quod ipse unum mantelettum de petra et calce facere et camerae prasdictae conjungere et mantelettum praedictam kernellare” These defensive walls were around 1.5 metres thick and remain in place today to their original height on the South East and South West sides, but have been pretty much destroyed everywhere else. 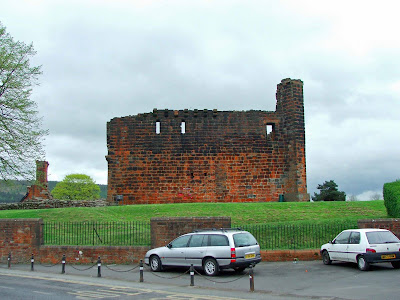 At this stage in the castle’s life, the internal buildings within the barmkyn would most likely have been of wood. It wasn’t until the early 1400’s, that Ralph Neville, Earl of Westmorland, who was granted the castle by Henry IV started to rebuild the internal buildings in stone, as well as adding the Red Tower to the North West of Strickland’s Tower. (William Strickland had become the Bishop of Carlisle in 1400, so his interests lay elsewhere) The new stone buildings also included a great chamber, a chapel, a private chamber, a great Hall, kitchens and last of all, the White Tower in the North West corner of the castle’s yard. 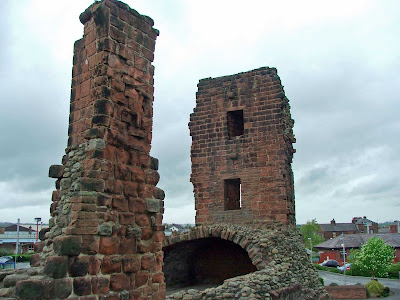 The remains of the Red Tower. 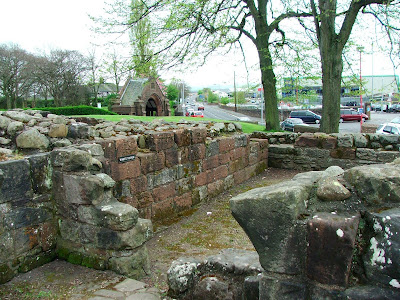 The remains of the White Tower.

Ralph Neville was killed at the battle of Barnet in 1471, and subsequently, Edward IV granted the castle and the town of Penrith to his brother, the Duke of Gloucester, later to become Richard III. The moat was most likely also added at this stage. Richard Duke of Gloucester continued the expansion of the castle, building a strong gateway to the North West of the Red Tower. 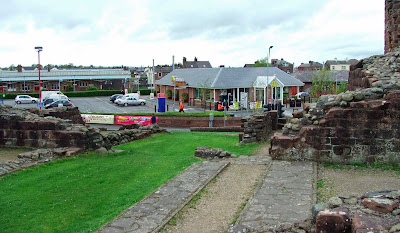 The remains of the North Western gatehouse.


The tower here was built out beyond the castle’s walls, to a position where the gate house could be easily defended from the tower walls. The Duke effectively turned the castle into a Royal residence, and during the building work took up residence at the nearby Duke of Gloucester inn. 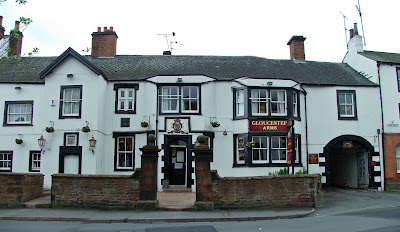 The Duke of Gloucester Inn.

Most of the buildings on the North West of the castle have been destroyed to such an extent, that there are barely any walls existing now that stand above waste height. The Kitchens and some store rooms are situated in this area, and although the floor plans are clearly visible, little remains of the walls above ground. A survey of 1565 tells us that the North East gatehouse was mostly collapsed at this time. Henry VIII had had materials from the castle removed to be used in building elsewhere. A further survey of the castle from 1572, describes the North Western gatehouse as in total ruin, the stables in danger of imminent collapse and the chapel, great chamber, hall and kitchens as un-repairable. It was also noticed that much stone had been removed from the castle. 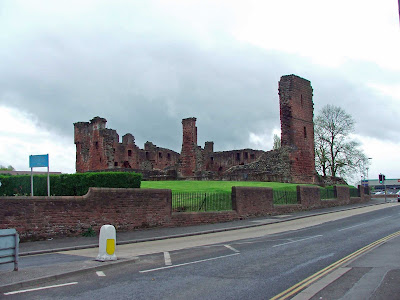 The last years of the castle seem to be of little consequence. In 1648, it was used as a base by General Lambert for about a month. It was granted to the Duke of Portland by William III in 1694, and was later sold to the Duke of Devonshire, and then sold onto the Lancaster and Carlisle railway company. Penrith Urban Council obtained the castle in 1914, against the will of the people of Penrith, and the site was excavated and consolidated during the 1920’s.
Posted by The Cumbrian Castle listing. at 5:07 pm

The redness of the first picture is stunning, you were very lucky with the light. I never get pictures like that!

I grew up in Penrith and due to unrestricted access to the ruins it was our playground for many years, our imaginations made it magical with an invisible dragon in the "dungeon" and a white lady in the tower window if we stayed after dark, we sat in the grand fire place in the great hall and imagined the Knights of days gone by, seeing these images for the first time in years is wonderful thankyou so much.

Castles seem boring to everyone but if you just explore them and imagine what they would have been like , it's reallly fun especially when you are a kid.

This post was a great read. I'm hoping to make an accurate 3D reconstruction of Penrith castle as part of a university project, if you're interested you can see the progress on my blog here: http://rebuildingcastles.wordpress.com/

the picture is really nicely shot