Fort St Catherine
St Catherine's Island
Tenby
Pembrokeshire
Wales
Work began on the building of the fort on the tiny island of St Catherine to the West of Tenby and South of the old medieval castle, in 1867. Lord Palmerston's commission into the defence of the United Kindgom saw that the Royal Dockyard at Pembroke and the anchorage at Milford Haven
would have been at risk of attack from Emperor Napoleon III's forces if they chose to land troops here for an invasion. 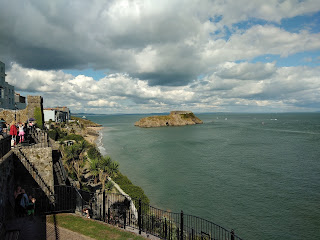 Above. View of the fort from the Esplanade to the West.

The original plan, was for a chain of forts that would have protected the coast from Tenby to Freshwater West, the whole of the South Western tip of the Welsh coast. The only fort eventually constructed however, was St Catherines at Tenby. 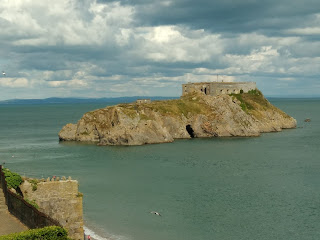 Above. Closer view of the fort.

The fort was designed by Colonel William Jervois, a 19th century British military engineer and diplomat. Jervois was heavily involved in the design and building of defences throughout the Empire,  including Gibraltar and the Andaman Islands, and was overseer of the chain of fortifications throughout the British Isles that became known as Palmerston forts. 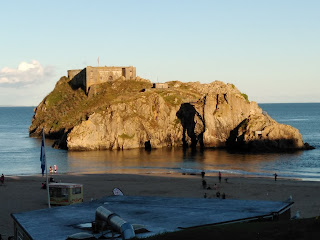 Above. View of the fort from Penniless Cove Hill.

Jervois designed the fort in such a way that it could defend both Tenby harbour and the beach at Saundersfoot to the North, all from one position. The simple rectangular building consisted of three granite and iron casemates (turrets) on two sides, housing three RML 7-inch guns. Three more gun platforms were built for RML 9-inch guns on the roof of the fort. 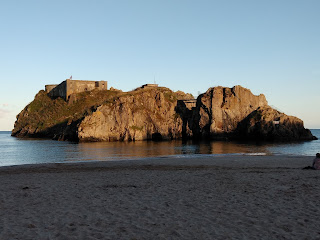 Above. View of the fort from South Beach.

The fort was accessed from the mainland on its West side, over a drawbridge built above a dry ditch. The ditch had walls with gun ports built into it, to defend against any attack on the fort from the mainland. Ammunition and powder was kept at the East end of the fort (seaward) at basement level. There was accommodation for 150 men. 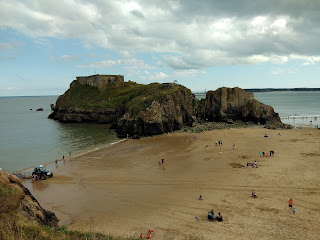 Above. View of the fort from the museum.
The government purchased the island from the Corporation of Tenby for the grand sum of £800 in 1866. The year after, the island was cleared and the massive granite blocks to be used for the fort's construction were lifted into place. 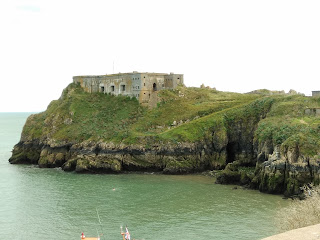 Above. View of the fort from the bottom of Castle Hill.

The fort was completed in 1870 with a final build cost of £40,000. The iron gun shields were fitted in 1886, making the fort finally battle ready. However....in the same year, a report to the Defence Committee stated that the 9-inch guns were useless. 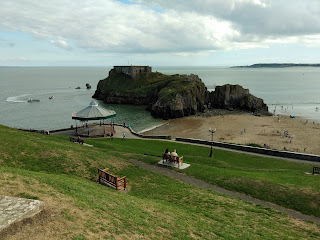 Above. View of the fort from the top of Castle Hill.
The much anticipated and feared French attack never came, and in 1895 a BLC 5-inch gun was fitted for training purposes. In 1907, the fort was decommissioned and bought by the Windsor Richards family who converted it into a private residence. The iron gun shields were removed and windows installed, and the whole fort was turned into a comfortable home.
During WWII the island was purchased by the army, and an anti-aircraft battery built in front of the building. The island fort was garrisoned by the Royal Marines, 4th Defence Battery and the Royal Artillery.
After the war, the fort was decommissioned again and let to a number of residents. It was listed as Grade II* in 1951. The fort was re-opened in 2017 as a tourist attraction.
Posted by The Cumbrian Castle listing. at 7:15 pm