Oxford Castle was founded in 1071, not long after the Norman invasion of 1066. The original fortification may have been constructed of wood and later replaced with a stone tower. Excavations beneath the motte and in surrounding areas have uncovered evidence of pre-Norman (Saxon) habitation. The impressive St George's tower, may be from this earlier period, and can be found a few yards from the Southern side of the motte. 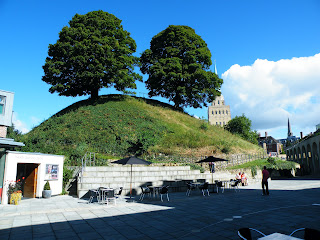 Above. The motte from South.


The fact that the motte appears to have been built over Saxon remains, could indicate a symbolical burying of the old (Saxon) and replacement by the new (Norman) and a firm establishment of Norman control over the city. 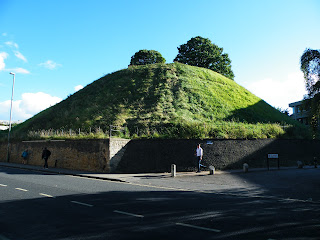 Above. The motte from New Road to the North.

The Norman castle was established by Robert D'Oyly, who came to England with William the Conqueror, and built very soon after Oxford was invaded. Originally standing to around eighteen metres high, it has been somewhat reduced in height now. St George's tower may have been added to the castle around 1074, using the foundations of an exisiting Saxon building. Easily seen from the road to the North and from the castle courtyard, this is an impressive motte.

Posted by The Cumbrian Castle listing. at 7:14 pm