Millom castle consists of two separate entities. Firstly there are the castle remains, which fall under Scheduled Ancient Monument protection, and secondly, the Great Tower, which is Grade I listed. The best view of the massive tower can be had from the church yard to the South of the castle remains. From here views of the tower are free from trees and other buildings. 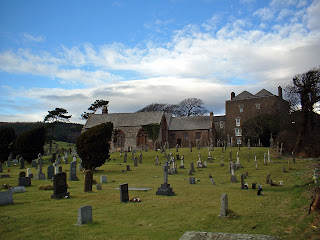 Above. View of the Great Tower from the church yard to the South of the castle.


The tower was built sometime around 1660, and sits at the South West corner of the castle ruins, surrounded by the ruined curtain walls and other buildings. 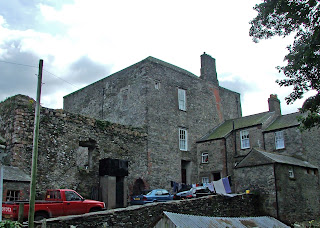 Above. View of the Great Tower from the footpath to the church.


The roofless building to the left of the tower, shown in the photo above, may represent the remains of a 17th century gatehouse. Access to this gatehouse is through a well preserved red sandstone arched doorway. This can be seen in the photo above just behind the blue car. 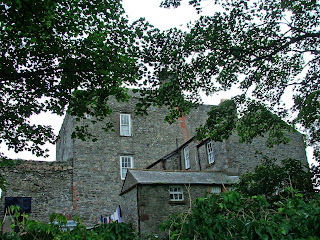 Above. Another view of the Great Tower from the West.


As well as the numerous more modern windows, smaller, original windows can be seen on all four external walls of the Great Tower...some are still in use while others have been bricked up. The tower now has a double pitched roof, but would most likely have had a flat crenellated roof. A 17th century engraving shows the tower with a ruined or possible unfinished top floor. 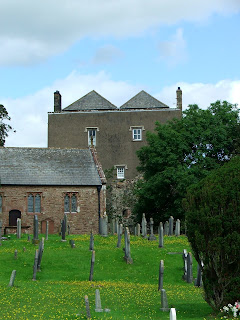 Above. The Great Tower from the churchyard, looking North.

It's most likely that the licence to crenellate, given to Ferdinand Huddleston on the 10th of March, 1622, relates to this portion of the buildings at Millom Castle, though it is now thought unlikely that this is in fact a licence to crenellate at all...a mistake possibly attributable to Curwen's writings in the 19th century. The wording of the 'licence' is as follows "Grant to Sir Thos. Metcalf and Dame Elizabeth, his wife of Nappa, Co. York, and to Ferdinand Huddleston, of Millom Castle and Nich. Curwen, of the Holme, both co. Cumberland, and others, of certain recognzances of 500l. each, forfeited by non-appearance of Metcalf in the Star Chamber; also of all fines in the Star Chamber, forfeiture of lands, &c., on account of the above recognizances" and doesn't really seem to represent a licence for Ferdinand to make any physical additions to his home!
Posted by The Cumbrian Castle listing. at 12:45 pm