Round Hill
Kendal
Cumbria
Now this site has been causing some confusion for a number of years now. The Pastscape website sites the 'motte' somewhere between the huge round hill at Birds Park Farm, and the small Woodland Trust managed 'motte' a few hundred yards to the West. Their map is confusing to say the least....check their entry for this site. I've always gone for the more visible of the three options for this alleged motte....and that was originally the huge round hill just to the South of Birds Park Farm on the North Eastern edges of Kendal. However....about a year ago, I found the feature in the field to the North of the Castle Green Hotel.....and was surprised to find so much masonry buried beneath the trees at the summit of the 'motte'. I've come to the conclusion however, that the 'motte' at the Castle Green is nothing more than a Victorian garden feature, most likely built by the Bindloss family when they lived at the Castle Green. The 'motte' at Birds Park Farm is harder to explain...perhaps it is nothing more than a drumlin...though it is very pronounced and doesn't have the normal tear drop shape that a drumlin has. 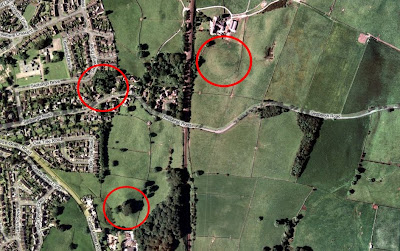 Above. Aerial view showing the close proximity of the three sites that could represent Round Hill.
The map, above, shows how close these three sites are, and how badly described the site is by both Pastscape and the Archaeology Data Service website. This is the text of the Pastscape website, describing the site "SD 532929 Motte shown on OS 1:25000 First Series as a circular feature with trees on top, now on the perimeter of Castle Park. The area is now administered by the Woodland Trust. (1) Probably a drumlin or a leftover from the railway which is adjacent to it. (2)"
On the map - Top right - Birds Park Farm 'motte'. Top left - Round Hill Wood 'motte'. Bottom - Castle Green 'motte'.
The fact that the area is administered by the Woodland Trust (which was added recently) now points to a new site that I didn't know existed. Just off Sedbergh Drive, at the Northern extremity of Kendal, there is a tiny wooded area, bounded on all sides by housing developments. 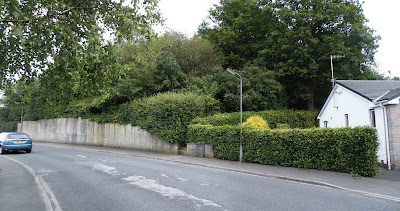 Above. The entrance to the wood is through the small gap in the concrete wall to the left of the lamp post.

Above. The Round Hill of Birds Park Farm. Drumlin or spoil heap?

Above. The Round Hill of Castle Green Hotel. Most likely a Victorian garden feature.
The Woodland Trust's website and details on Round Hill Wood.
Posted by The Cumbrian Castle listing. at 7:55 pm