Whether Fold
Kentmere Valley
Near Kendal
The River Kent begins its decent into Morecambe Bay from Lingmell End, flowing into Kentmere Reservoir, and then South through the Kentmere valley, into Kentmere tarn, and then onto Kendal. On its way, it passes through beautiful countryside scarred by years of slate mining, past pre-historic settlements, and runs along side the remains of more recent human activity. The following two photos show Whether Fold....a sheep fold about hundred yards from the reservoir's damn. 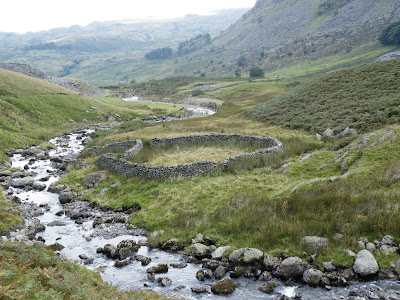 I have no idea how old this structure is...when it was built, or when it was last used. 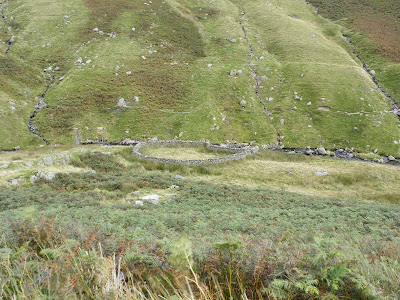 Constructed of lime stone blocks and in a similar fashion to the dry stone walls that line the valley walls, it's a surprise that it's still standing. The river here is known to rise at an alarming rate when the rains cause the reservoir to overflow, and the fold is right in the path of the river. It doesn't seem to be a listed structure, but does seem to have had some consolidation work done on it over the years.
Posted by The Cumbrian Castle listing. at 9:01 pm