This interesting earthwork feature can be seen just to the North of the Castle Green Hotel in Kendal, sandwiched between the A684 and the Kendal to Windermere railway. The railway embankment lays some 50 yards to the East of the mound, with both structures appearing to merge gently into each other. At first glance, this earthwork feature, a mound with a steep West facing slope, crowned by a huddle of trees, appears to be nothing special. Upon closer inspection however, a number of interesting points appear.

The mound is flat topped, with a ring of trees crowning the summit. There is a fairly large central area within this ring of trees. 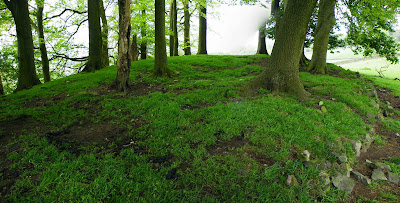 The most complete piece of masonry, appears to be on the West facing slope, as shown in the photos below.

This photo clearly shows the masonry beneath the root line of the mature trees.

The stone work is visible most of the way around the summit of the mound, although on the North and Eastern sides, it is either buried just beneath the surface, or has been robbed or fallen away.

The above photo shows the summit of the mound from the North. The slope here to the fields below, is much gentler.

The photo below shows the mound from the South. The railway embankment can just be seen to the right of the photo. The walk to the summit from here is a gentle uphill walk. 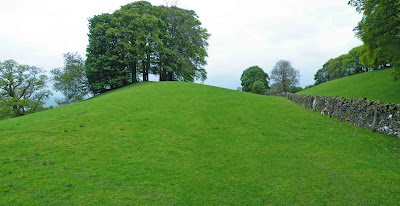 To the West of the mound, and at the foot of the steep drop, a shallow pond or mere can be seen. The original banks of this small mere can still be seen as earthworks higher up the field, indicating that it may have been larger some time in the past. It is this feature that I feel indicates the initial use of this site.

If this earthwork feature is taken in the context of the Castle Green Hotel, which lays about 100 yards to the South, it could be suggested that it is merely a garden feature or 'prospect mound' attached to what was once a wealthy family's home, not a spoil heap from the nearby railway, and, unfortunately, probably not the remains of a motte and bailey castle!! The Bindloss family built Castle Green as a home....and the motte, or the mound as it should probably be more correctly referred to as, which is probably one of the many drumlins left over from the last ice age, is ideally situated to give the family panoramic views over Kendal. Indeed, the mound looks directly onto Kendal castle, some three quarters of a mile away to the West, with the tiny mere at its Western base making a pretty ornamental garden. The gentle slope rising from South of the gardens of the Castle Green hotel to the summit, would have made for an easy walk to the summit....and the masonry that encircles the summit could have been put in place to stabilise the earth and prevent any slippage, especially with the number of trees already growing there. There seems to be no evidence of this being a motte and bailey castle...there are no signs of infilled or silted ditches, no banks acting as defences at the base of the mound, and the fact that it's overlooked by higher ground to the East negates any defensive qualities this site might posses. All in all, this appears to be an interesting footnote to the Castle Green Hotel, built by a rich local family in order for them to enjoy the gardens of their home, and also to enable them to look out over the town that they lived and worked in.
Posted by The Cumbrian Castle listing. at 4:26 pm

I live near to this motte - it's a facinating feature.

Sadly it's been included (together with the pond area) in South Lakeland District Council's Land Development Plans. Hopefully it won't go past the public consultation because the pond also has protected species.

Keep up the good work Matthew.